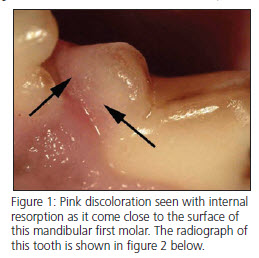 Tooth resorption in dogs (TR) occurs in three primary patterns: internal resorption, idiopathic bony replacement resorption, and osteoclastic resorption as seen in feline patients. The latter is the least common of the three patterns seen in dogs and will not be discussed here. Feline tooth resorption (previously known as FORLs or resorptive lesions) was discussed in the January 2011 newsletter

Etiology and Pathogenesis
Canine tooth resorption presents in two main patterns: external and internal. External resorption, which is more common, is also known as idiopathic bony replacement resorption. With both patterns, invasion of the tooth structure by Osteoclasts (in external resorption) or Odontoclasts (in internal resorption) leads to remodeling of the dental structures and gradual replacement with bone. Normally, dental structures are protected from this cellular invasion by the presence of a layer of demineralized tissues on the surface of the root (cementoid) or on the surface of newly formed dentin on the inside of the tooth (pre-dentin). Mineralization of these tissues leads to a “bridge,” which allows the odontoblasts/osteoclasts to invade the tooth. Initiating causes for tooth resorption may include dental trauma, orthodontic treatment or a malocclusion that places abnormal forces on a tooth. In most cases, however, no initiating cause is evident.

Clinical Presentation
Tooth resorption in dogs is generally considered to be non-painful until the process becomes exposed to the oral cavity, so most patients with tooth resorption will not show clinical signs recognized by the owner as being painful. Internal resorption can sometimes be seen as a pink discoloration of the crown (fig. 1), which becomes evident as the area of resorption approaches the surface of the tooth. Most tooth resorption in dogs, however, is diagnosed radiographically.

Radiographic appearance
Internal resorption begins within the endodontic system, usually in the crown of the tooth. The effected area of the tooth becomes indistinct, and the outline of the root canal spaces becomes less distinct in the area of resorption (Fig. 2).

External resorption (idiopathic bony replacement resorption) is commonly seen in older patients. Premolars are most commonly effected, and the process usually begin apically and progress coronally (Fig. 3). Many effected teeth never have more than 1/3 to 1/2 of the root effected, but the process may continue until the entire root structure of the tooth is resorbed and the crown of the tooth is mobile. During resorption, the effected part of the root is typically ankylosed (fused) to the surrounding bone in the area of resorption, eventually becoming replaced by trabecular bone. The periodontal ligament space in effected areas is gradually lost. In some cases, the resorption can start in the mid-root area (Fig. 4). In most cases, no radiographic lysis is appreciated in the areas of resorption.

Treatment
Regardless of the type of tooth resorption present, treatment planning cannot be accomplished without detailed dental radiographs. As in all other dental treatment, skull films are inadequate. The following guidelines can be used to decide what should be extracted and how the extractions should be performed:

1. Teeth in which the areas of resorption are exposed (or soon will be exposed) to the oral cavity should be extracted.

2. Teeth that are mobile secondary to root resorption should be extracted.

3. When a tooth is extracted, any root structure coronal to the area of resorption that is clearly visible and distinct from the surrounding bone should be extracted in it’s entirety.

4. Any root remnant associated with radiographic lucency should be extracted.

5. Simple crown amputation with some drilling of the root remnants should be reserved for only those cases in which the roots are no longer radiographically distinct from the surrounding bone. In general, this technique is an overused and crude substitute for proper care. When this technique is used inappropriately, painful infected root remnants can remain hidden under the gum line for years.