Missing teeth are common in veterinary dental practice, especially in smaller patients. It is important to obtain dental radiographs in areas where teeth are missing to rule out unerupted teeth associated with Dentigerous cysts. In general unerupted teeth should be extracted. When an unerupted tooth has no associated radiolucency (a dark area or line around the tooth), periodic radiographic monitoring is an option.

What Are Dentigerous Cysts in Dogs?

A human study found dentigerous cyst formation in nearly one-third of patients with unerupted teeth. To the author’s knowledge, there are no studies documenting the incidence of dentigerous cysts in veterinary medicine. 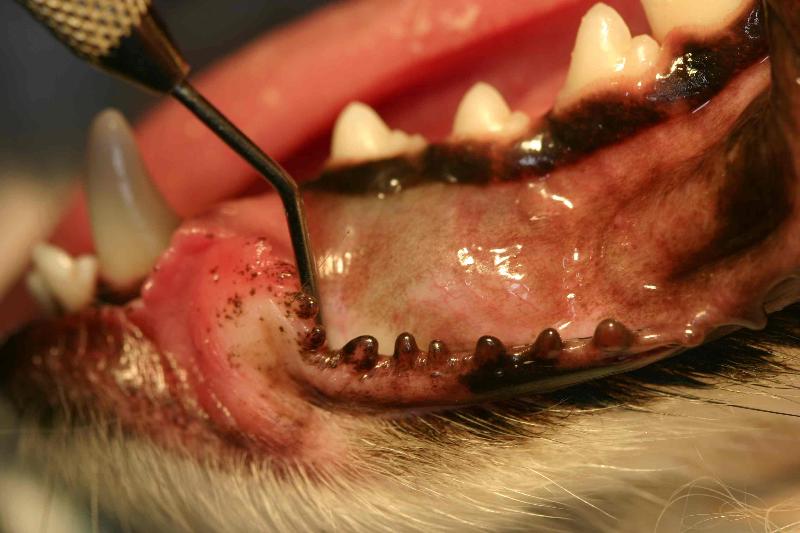 Clinical photograph of a dentigerous cyst. Note the absence of a visible first premolar and the slight bluish discoloration that is often present.

Dentigerous cysts are fluid-filled lesions associated with unerupted teeth. The most commonly affected teeth in the dog are the mandibular first premolars. In one recent study, dentigerous cysts were found to be the most common of all odontogenic cysts in dogs, with brachycephalic breeds statistically overrepresented.

How Do Dentigerous Cysts Form?

Dentigerous cysts originate from a proliferation of the enamel organ or reduced enamel epithelium that surrounds the crown during odontogenesis and has the potential to form the secretory lining of these cysts. The cyst typically forms around the crown of the tooth and attaches to the cemento-enamel junction. They ex

pand by a combination of passive fluid accumulation, epithelial cell proliferation and the release of osteoclastic mediators that can accelerate bone resorption. Since not all unerupted teeth lead to cyst development, other factors are involved. Trauma may play a role in some cases. In humans, genetics are believed to be a contributing factor.

Radiograph of the dentigerous cyst pictured above. Note the unerupted first premolar, multilocular lucencies and pathology closely associated with the canine tooth and second, third and fourth premolars. Some or all of those adjacent teeth may require treatment.

Diagnosis is based on clinical and radiographic appearance and histology. On physical examination, a tooth is missing and there may be a fluctuant swelling. Differential diagnoses include cysts, tumors, abscesses, or granulomas. Radiographs are usually diagnostic for dentigerous cysts, showing an unerupted tooth within a radiolucent defect, surrounded by thin, well-defined radiopaque margin. These cysts are usually unilocular, but may be multilocular as in the case presented here. 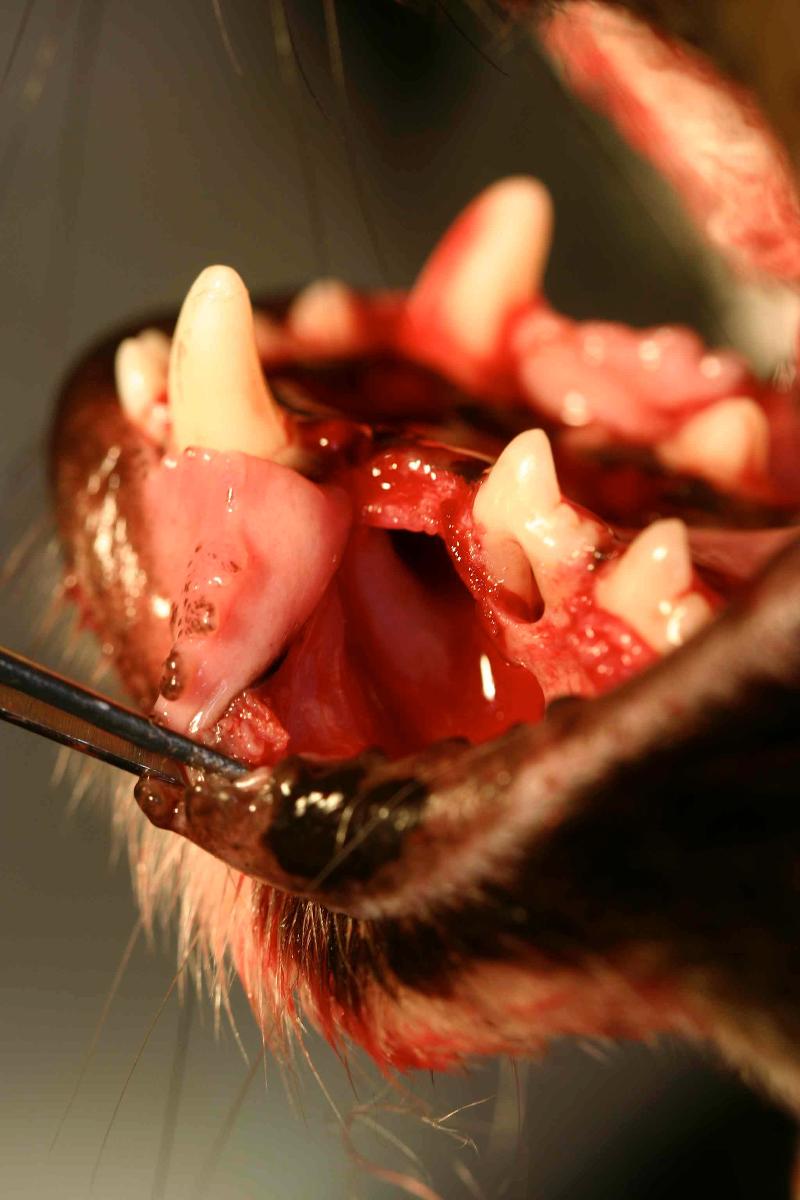 Dentigerous cysts are lined by stratified squamous epithelium that is four to six cells deep. Histology is important in confirming the diagnosis, as a small number may actually be odontogenic keratocysts, have infection, or in rare cases undergo transformation to an ameloblastoma or carcinoma.

Complete surgical excision is the treatment of choice and usually curative. Incomplete removal of the cyst, including the epithelial lining, may result in recurrence, continued bony destruction, and also leaves open the possibility of eventual malignant transformation. Placement of a bone graft prior to closure may be beneficial to improve the integrity of the jaw. Some authors disagree with placing graft type materials in these defects prior to closure, maintaining that a blood clot in the surgical site results in acceptable bony healing. The author prefers to pack these defects prior to closure, utilizing Fusion (Veterinary Transplant Services, Kent, WA), a graft material in putty form consisting of demineralized freeze-dried bone graft and a sintered combination of hydroxyapatite and tri-calcium phosphate. Fusion provides two different pathways of osteoinduction and is reasonably cost-effective for larger defects. (Review of common veterinary bone graft products for dentistry and oral surgery available here).

An initial radiographic recheck interval of three to six months is recommended for the first year. This allows ample time to notice any bony changes and assess any recurrence. If there are no signs of recurrence it is recommended to evaluate the patient annually thereafter. One author suggests rechecks for two years or until there is complete re-ossification of the site. 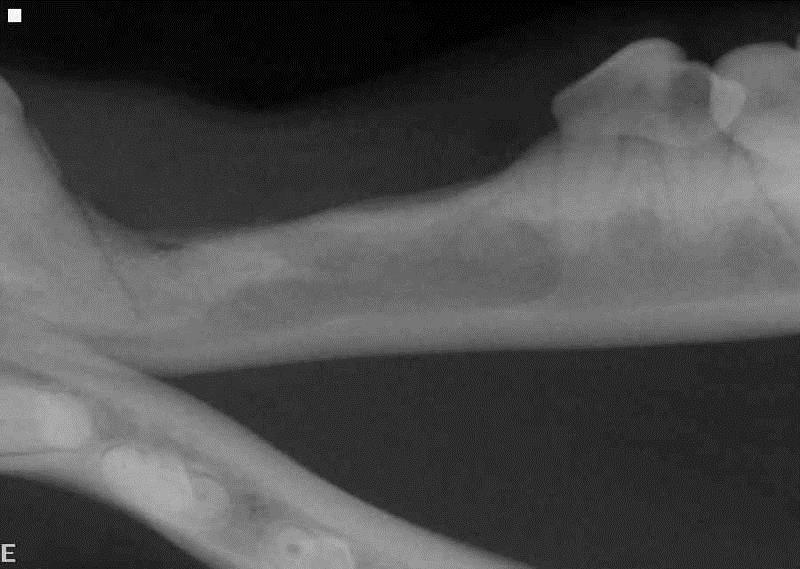 Radiograph 16 months after the initial surgery. The first, second, and third premolars were extracted during the initial surgery. Note the bone that has filled in next to the apex of the canine tooth. The slightly narrower root canals in the fourth premolar when compared to the original film indicates that this tooth is still vital and continuing to mature normally.

Early detection and treatment of dentigerous cysts is crucial to minimize damage of the bone, associated teeth and adjacent vital structures. When identified and treated early, these patients have an excellent prognosis. Larger cysts can cause severe damage to the surrounding bone and compromise adjacent teeth. Treatment of the larger cysts can by complicated, with multiple treatment options available. Consider referred to your local veterinary dentist for treatment of these cases.