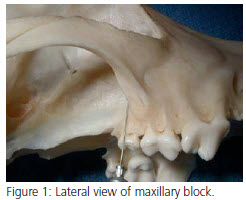 Maxillary block (Figures 1 and 2) Area blocked: This block may also be accomplished via the infraorbital canal as detailed in lat month’s newsletter. All dental, bone, and soft tissues of the entire maxillary quadrant, including the soft and hard palatal structures on that side.

Technique: Palpate the ventral aspect of the zygomatic arch where it joins the maxilla. The needle should be directed dorsally, adjacent to the bone, advancing it to the approximate level of the root tips of the last molar. In feline patients, this area is best reached through the infraorbital canal, using the infraorbital block previously described. 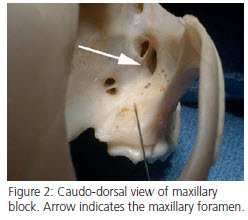 Major Palatine Block (Figure 3) Area blocked: Bone and soft tissue of the hard and soft palate and the palatal aspect of the gingiva surrounding the maxillary arcade.

Technique: Place the block just caudal to the area desired to be blocked. Imagine the line halfway between the midline and arcade, advance the needle to the palate, and place the block. An obvious bleb will be seen, confirming the placement of the block. The technique is the same in the cat, with the major palatine foramina being located on a line connecting the palatal cusps of the upper fourth premolars (Figure 4). 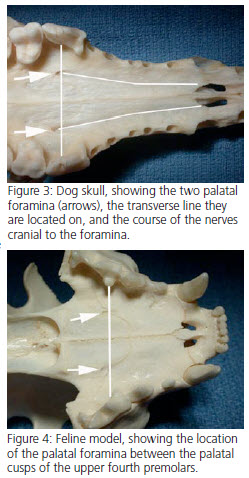 Mental (Middle Mental) Block (Figure 5) Area blocked: If the block is placed outside the foramen, only soft tissues around the ipsilateral canine teeth and incisors are affected. If the block is placed inside the mental foramen and digital pressure is maintained to force the agent to diffuse caudally into the mandibular canal, the dental structures and bone will also be affected. In the cat, it is difficult to place the block inside the foramen due to its small size.

Technique: This block may be placed in either an intra-oral or extra-oral fashion. If the extra-oral technique is used, a small area on the ventral mandible just rostral to the angular process is clipped and prepped. The ventral surface of the mandible is palpated for the small notch present just cranial to the angular process. In smaller dogs and cats, it may not be possible to palpate this notch. The needle is introduced through the skin below this notch, and is walked dorsally up the medial aspect of the mandible approximately halfway up the mandible. For the intra-oral technique, the thumb is placed on the cranio-ventral aspect of the coronoid process of the mandible, and the forefinger of the same hand is placed on the angular process. An imaginary line is drawn between these two fixed points, and the needle is introduced on the medial aspect of the mandible and advanced along this line, approximately half the distance to the angular process. Regardless of which technique is used, in many patients it is possible to palpate the mandibular nerve and foramen intra-orally to help confirm the placement of the needle prior to injection. This block is done in a similar fashion in the cat.

Splash Block
One other block that may be used in oral surgery is the “splash block.” A splash block is simply either injected into tissues in the surgical site or placed into a closed space where it may diffuse. Examples would include placement of the anesthetic agent into a sutured extraction site, where the agent is allowed to diffuse into the tissues of the extraction site.