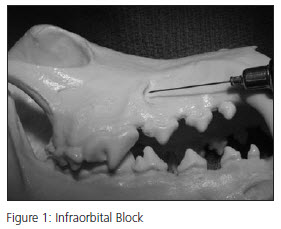 Materials required for local anesthesia are simple and inexpensive. Several agents are commonly used for nerve blocks, and they vary as to their time of onset and duration. The selection of an agent with an added vasoconstrictor (epinephrine) will make the block last longer. The use of epinephrine is contraindicated in patients with uncontrolled hyperthyroidism, cardiac dysrythmias, and asthma. Consider using bupivacaine with epinephrine whenever possible, and use either bupivacaine or mepivacaine without epinephrine when epinephrine is contraindicated. I prefer to use 3 cc syringes with 22 ga needles for drawing up the anesthetic agents and the changing to a 27-gauge 1 1/4 inch needle for placing the nerve blocks.

Complications of local anesthesia may include dysrythmia secondary to intravascular administration, bronchospasm (if epinephrine was utilized), neuropathy secondary to trauma, and bleeding/hematoma. When administering the inferior alveolar (mandibular) nerve block, it is possible to inadvertently block the lingual nerve, which innervates the tongue. This may lead to self-mutilation in the patient upon recovery. Due to the low volumes of agent utilized in small patients, a safe total body dose of the anesthetic agent is easily exceeded, leading to cardio-respiratory depression and possible death. Although each of the agents utilized has their own safe doses, an easy rule of thumb in dogs and cats is to keep the total body dose under 2 mg/kg BW, regardless of the agent being utilized. In small patients, it may be safest to draw up the total calculated body dose at the beginning of the procedure. When the contents of this syringe are gone, no additional agent should be drawn up. Small amounts of agent may be diluted with sterile saline to provide enough volume for the anticipated number of blocks.

In general, nerve blocks require 0.1 to 0.2 ml per site in feline patients, and 0.2 to 0.3 ml per site in canine patients. For all nerve blocks, you should aspirate prior to injection to decrease the chances of intravascular administration. Some authors advocate the use of a combination of Lidocaine and a longer-acting agent, mixed together in the same syringe. This can theoretically provide both rapid onset and long-action in the same injection. Mixing agents in this manner is commonly used by human oral surgeons. When mixing agents, be sure to add the mg of all drugs drugs used together when calculating the maximum safe dose. Total mg used should be below 2 mg/kg BW. The following blocks are the ones used most commonly in canine and feline patients.

Area blocked: Depending on the level at which the block is placed, you can effectively block the teeth, bone, and buccal soft tissue from either the canine tooth forward, from the third premolar forward, or the entire maxillary arcade.