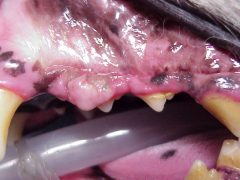 History: A seven year old Siberian Husky-cross dog was referred for evaluation of a gingival mass. Two years previously, the referring veterinarian had resected a gingival mass from the same area between the maxillary left first and second premolars. A biopsy at that time had shown an Ossifying Epulis, with tumor cells extending to the margin of the specimen submitted. The tumor appeared to recur four months after the original surgery, and had continued to grow slowly since that time.

Clinical findings: A gingival mass (Figure 1) was present in the area between the first and second left maxillary premolars. The mass was a firm, pink colored, and had an irregular surface. The first premolar was covered almost entirely by the tumor. Due to the location and appearance, the tumor was thought to be a recurrence of the original tumor. A surgical procedure was planned to completely remove the tumor and any associated teeth. 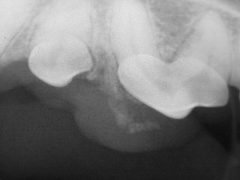 Under anesthesia, a dental radiograph (Figure 2) was obtained which showed a partially mineralized soft tissue mass. It was not clear from which tooth the mass was emanating. A segmental maxillectomy with approximate 5-10 mm margins was performed. The resected tissues included the first and second premolars along with all associated periodontal structures. Picture 3 shows the patient after the complete resection and prior to closure. Note that the resected area of the maxilla extended across the palate and the nasal turbinates were exposed. Figure 4 shows the site after closure. 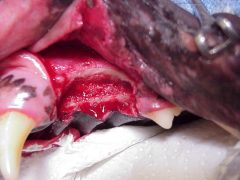 Figure 3. Intraoperative view after en-bloc resection, and prior to closure with a buccal mucoperiosteal flap. Note the nasal turbinates are exposed in the center of the surgical site and inappropriate closure can lead to the formation of an oro-nasal fistula. 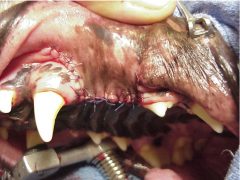 Figure 4. Final picture after surgical closure. It is imperative that absolutely no tension be present when the flap is sutured.

The patient recovered uneventfully, and the biopsy showed clean surgical margins. The tumor had not recurred one year post-operatively.

Clinical significance: The oral cavity is the fourth most common area for neoplasia in dogs, and accounts for 5% of all malignant neoplasms. The Epulides are a group of benign neoplasms containing periodontal ligament stroma, are the most common oral neoplasms in dogs, and represent around 30% of all oral neoplasms. The Epulides are generally divided into three types: Fibromatous (fibrous), Ossifying, and Acanthomatous. The newer nomenclature for these three tumors are: Peripheral Odontogenic Fibroma, the Ossifying variant of the Peripheral Odontogenic Fibroma which tend to be more invasive and more likely to recurr, and Acanthomatous Ameloblastoma. These tumors all arise from residual developmental cells residing in the periodontal ligament, and all involved periodontal structures must be removed to affect a cure. While a fibromatous epulis will usually respond with conservative excision, the other two forms require a more aggressive surgical approach. For ossifying and acanthomatous epulides, this can mean an en-bloc resection, or in some cases even a segmental maxillectomy/mandibulectomy. Epulides respond well to radiation therapy, but this mode of treatment is rarely chosen due to expense and the relatively high rate of malignancy that develops at the irradiated site at a later date.

There is a tendency to call all gingival tumors an “epulis”, and to forego histopathology after resection. A clinician should always consider the possibility of something other than a fibromatous epulis when treating gingival tumors, and should always submit histopathology after removing these tumors. When first seen, we generally perform conservative resection of any tumor and submit a biopsy. More aggressive initial surgery should be avoided to avoid seeding potentially malignant cells into tissues that might be needed for definitive treatment of a more aggressive tumor. The fact is that you really do not know what type of surgery is indicated until you have the biopsy in hand. In many cases, the biopsy comes back as a Fibromatous Epulis, which usually responds to the initial conservative surgery. If the biopsy does come back as a more aggressive variant of an epulis, or as a malignant tumor, further treatment is usually indicated.