A 13-year-old Wheaton Terrier presented for an mandibular Osteosarcoma previously diagnosed by incisional biopsy. On physical examination, there was a 1.5-2cm diameter ulcerated mass that was located on the buccal aspect 308 and 309 (Figures 1 and 2). Dental radiographs showed a circular lytic bone lesion extending from the distal root of 307 to the mesial root of 309 (figure 3). Lymph nodes were of normal size and 3 view thoracic radiographs showed no evidence of metastasis.

A segmental mandibulectomy was performed with 2cm of gross and radiographic normal tissue margins. The rostral margin of the surgery site was made at the furcation of 306. The caudal margin was at the distal aspect of 310. Full thickness ostectomies were made keeping the same margins, extending in a straight line to the ventral cortex. The mandibular artery and vein were protected prior to ligation. Once the vessels were ligated the ostectomy sites were completed and the mass was removed en-bloc and submitted for histopathologic margin review. The remaining labial mucosa was undermined to create mucosal flaps for closure and the bone margins were smoothed and rounded. The site was closed with 4-0 Monocryl with good post-operative cosmesis (figure 4). Crown reduction/Vital pulp therapy was performed on 204 and 404 to prevent occlusal trauma that can occur post-operatively due to the drifting of the mandibles (figure 5). Figure 6 shows the radiographic appearance of the rostral surgical margin. Note that the mesial root of 306 was removed after the rostral ostectomy was performed. 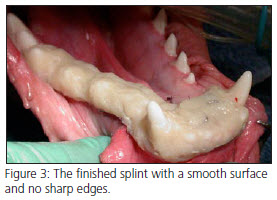 In this patient a segmental mandibulectomy was chosen due to the location and size of the mass. Two cm surgical margins were achieved without resecting the Temporomandibular joint, which would have been more invasive. We were also able to preserve the left lower canine tooth and rostral aspect of the left mandible. The prolific collateral blood supply in the oral cavity is adequate to maintain vitality in the segment of the bone and teeth rostral to the surgical site.

Patients treated with segmental mandibulectomy may exhibit drifting of the mandible toward the side of the procedure, resulting in soft tissue trauma from the canine teeth. Crown reduction of the contralateral mandibular canine tooth and ipsilateral maxillary canine tooth eliminates trauma to the soft tissues by the canine teeth. Although mandibular drift is less common when all four canine teeth are still present, the canine teeth were shortened in this patient to prevent a second anesthetic episode. When performed under controlled circumstances, vital pulp therapy can be done rapidly and has a high rate of success.

These patients adapt rapidly to eating and drinking and almost all patients are eating the same day as surgery. We recommend softening the food and withholding chew toys for the first 3-4 weeks. Close monitoring of the oral cavity and lymph nodes is recommended for evidence of recurrence or metastasis.