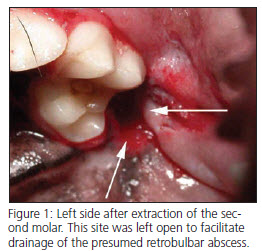 The patient, a 4 ½ year-old NM longhaired dachshund presented with a recent history of pain, difficulty when opening his mouth (trismus) and weight loss. Three weeks prior to presentation, the patient had received a dental cleaning at a general veterinary hospital. Pre-surgical bloodwork at that time had been normal. No painful dental problems had been identified and no dental radiographs were taken at that time. The trismus was first noted two weeks after the cleaning procedure. A few days prior to presentation here, the patient had been placed on Carprofen and Robaxin (for back pain), with no clinical improvement. 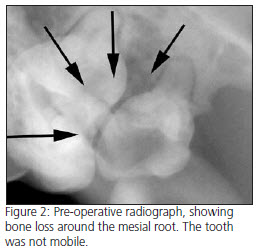 On presentation, physical examination was unremarkable, except for obvious reluctance to open the mouth. Retropulsion of both globes was equal and normal. The owner consented to an anesthetized exam, dental radiographs and possible TMJ radiographs. Periodontal pockets 6 mm deep were present between the first and second maxillary molars on both sides of the mouth, and a small reddened area was seen distal to the left upper second molar (210). Dental radiographs of both sides (see fig. 2 and 4) showed extensive bone loss around the mesial roots of both maxillary second molars, which extended to and surrounded the apices. Since two of the three roots of each tooth were still anchored in solid bone, these endodontically infected teeth showed no evidence of mobility. No crepitus of the TMJ joints was evident, although a slightly decreased range of motion was noted. Increased resistance to retropulsion of the left globe was noted under anesthesia. 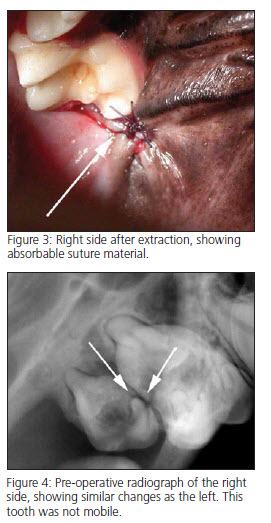 Based on the anesthetized exam, clinical signs and dental radiographs, a presumptive diagnosis of a left sided retrobulbar abscess was made. Both maxillary second molars were extracted. The site on the right side was sutured closed and the site on the left side was left open. Please note that the presence of a retrobulbar abscess is one of the rare times that the author does not close extraction sites. The patient was sent home on Carprofen and Clavamox.

The patient showed partial improvement for several weeks but continued to be painful when opening his mouth. Additional antibiotic therapy and the addition of Tramadol to the Carprofen previously prescribed made very little difference. Physical exam one month after surgery was unremarkable, except that the muscles of mastication seemed slightly atrophied and slightly painful when firm digital pressure was applied. Skull/TMJ films at this time were normal and one week later the patient was re-anesthetized for another oral exam. Differentials at this time included incomplete extraction of one of the teeth, neoplasia, resistant infection and Masticatory Muscle Myositis. A small draining tract was still present at the left second molar extraction site from five weeks prior. Dental radiographs of both previous extraction sites confirmed complete extraction with no retained roots. Cytology of a small amount of purulent material present in the draining tract showed short rods, and a culture was submitted to the lab. A blood sample was also drawn for Masticatory Muscle Myositis titers. The patient was sent home on Baytril and immunosuppressive doses of Prednisone for possible MMM.

The owner reported immediate dramatic improvement in the patient, who could open his mouth almost normally within 48 hours. Culture results showed a Pasteurella spp, sensitive to Baytril and both of the previous antibiotics that had been used. Since the organism was susceptible to every antibiotic that had been used, it was unlikely that this was the primary cause of the clinical signs. The blood titer was positive for MMM. The Baytril was discontinued after 7 days, and the prednisone was tapered very gradually after 10 days. The patient remains symptom-free, but has shrunken and firm Temporalis and Masseter muscles with decreased range of motion. This is likely due to partial replacement of these muscles with scar tissue.

1. This patient presented for what first appeared to be primary dental disease causing a retrobulbar infection. The dental pathology appeared to explain all of this patient’s clinical signs.

2. Periodontal pockets between the first and second maxillary molars are very common in dogs, and due to their location are easily overlooked. The periodontal disease in this area commonly extends to the apices of the roots, resulting in endodontic infection. When this occurs, the teeth are referred to as “Perio/Endo teeth”.

3. Multi-rooted teeth can be abscessed for years before becoming clinically mobile.

Based on the positive MMM titer and the almost immediate response to prednisone, this patient’s primary problem was likely MMM and he probably had subclinical MMM prior to it’s initial dental treatment by the referring veterinarian. MMM is seen most frequently in large breed dogs and Cavalier King Charles Spaniels and should always be a differential in any patient exhibiting trismus. Appropriate treatment in this patient was delayed for several weeks due to the presence of concurrent dental disease that could have caused the same signs. In retrospect, further diagnostics should have been pursued when substantial improvement did not occur within a week after the initial extractions. The mainstay treatment of MMM is immunosuppressive does of corticosteroids.