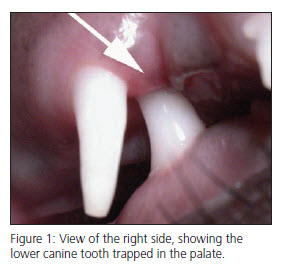 History: An eight-week old female German Shepherd puppy presented for evaluation of her occlusion. The owner stated the puppy was sold to them as a show/breeding quality puppy, and they were concerned that the teeth did not line up correctly.

Clinical findings: Examination revealed complete deciduous dentition and a Class II malocclusion (overbite) with approximately 8 mm of over jet. (Over jet is the distance by which the incisors exceed their normal scissor relationship.) Both lower canine teeth were protruding into the palate (See Figures 1 and 2), creating small ulcerated lesions. The puppy was reluctant to eat dry food, but would eat moistened food. 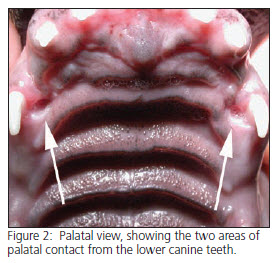 The owners were advised to have the lower deciduous canines and incisors removed, in an effort to allow normal jaw growth to occur. After a dental radiograph was obtained (figure 3), the aforementioned teeth were extracted, and the extraction sites were sutured closed. The client was instructed to return for re-evaluation when the permanent dentition was almost completely erupted at 7 months of age. The owner was counseled that this puppy will probably not be a good show or breeding candidate, pending the results of the re-examination.

Clinical significance: Class II malocclusions (overbites) are the most common malocclusion seen in canine patients. In these patients, the lower canines commonly protrude into the palate and cause painful ulcerative lesions. This discomfort can be evidenced by gently squeezing the maxilla and mandible together. Additionally, the sharp incisal edges of the lower incisors can irritate the palatal soft tissues, causing further discomfort.

The four quadrants of the maxilla and mandible have been shown to develop independently. The normal interlock of the lower canine in front of the upper canine, and the lower first molar inside the upper fourth premolar keep the jaws aligned in their proper relationship as they develop. In this patient, the lower canine teeth were trapped in the palate and the lower incisor were trapped in a palatal fold. This relationship results in an “adverse interlock” and prevents the maxilla and mandible from developing in a normal relationship. The areas of abnormal contact actually serve to maintain the abnormal occlusal relationship. 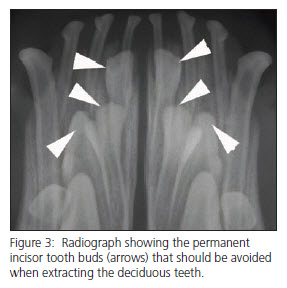 In the past, it has been common to delay definitive treatment until the permanent teeth erupt, or until the time of surgical spay/neutering. This approach allow no chance for normal growth to occur during the time of greatest jaw development. Interceptive orthodontics refers to the selective extraction of deciduous teeth in an effort to allow the normal genetic potential of the animal to develop. The sooner interceptive orthodontics is undertaken, the better the chances are for correction. Interceptive orthodontics also eliminates the pain from traumatic occlusion. The removal of the lower deciduous canines in this patient allowed more room for the permanent canine teeth to erupt in a normal position lateral to the palate. Pre- and post-operative radiographs are advised to guide your extraction technique and provide proof of any permanent teeth that were missing prior to your intervention. Extreme care should be exercised when removing deciduous teeth to prevent damage to the developing permanent tooth buds, which are located adjacent to the primary teeth and easily damaged. The entire root of the deciduous tooth should be extracted to maximize the chance of correcting the malocclusion. The barbaric practice of simply amputating the crowns with a nail trimmer or similar instrument causes pain, infection and may cause damage to the permanent teeth.